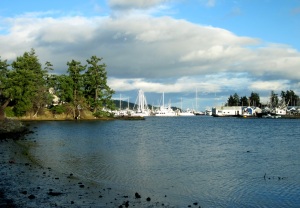 Today I want to point you in the direction of a super accessible local park that you may not have heard too much about. Shoal Harbour Bird Sanctuary is right in downtown Sidney, and while definitely an urban park rather than a wilderness one, it boasts some pretty fantastic ocean vistas. My favourite way to check out the view and the birds there is to head out onto Resthaven Island, a little point of land that’s separated from the mainland by an itty bitty channel (and joined by a short and sturdy two-lane bridge). There’s a well-maintained loop trail there – it’s actually a municipal park, a narrow one that skirts the edge of the island. The park is called, remarkably enough, Resthaven Linear Park. It’s a great place to birdwatch, and with all the marinas close by (there’s Van Isle and Shoal Harbour Marina on one side, and Capital City Yacht Club and North Saanich Marina on the other) it’s also an excellent spot for boat-ogling, if you’re into that sort of thing. 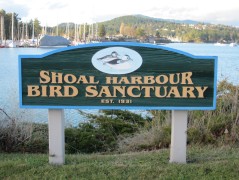 The area around Resthaven Island is part of the Shoal Harbour Migratory Bird Sanctuary, a 143-hectare federally protected sanctuary. It was awarded this designation in 1931, making it one of Canada’s oldest migratory bird sanctuaries. Many different species of birds frequent the area – in addition to a number of Canada Geese and Mallards, you’ll often see Common Loons, Buffleheads (more about these guys below!) and Hooded Mergansers further out in the bay.  There’s a good chance you’ll see a Double-crested Cormorant or two sunning themselves on nearby wood pilings, and if you keep a sharp eye out you’ll likely find Black Oystercatchers or Killdeer poking around on the shoreline.

Local Stewardship and The Significance of the Bufflehead

There is a local citizen’s stewardship initiative for the area, whose stated goal is to protect and celebrate the unique environmental and cultural features of the area. One great example of their awareness-raising activities has been to designate October 15 as All Buffleheads Day in celebration of these birds’ annual – and by all accounts extremely punctual – return to their wintering grounds here on the Island. I like their characterization of the multifaceted significance of this local area:

Shoal Harbour Sanctuary provides ecological, scientific, social, cultural, educational, and economic benefits to the community in various ways, including maintenance of biological diversity and ecological processes, providing outdoor recreation opportunities with scenic vistas, creating a sense of place for residents, an opportunity to learn about the local environment, to monitor long-term changes in the environment, and to enhance the region’s economy through tourism.

In doing a little digging around for this post, I found a further example of the significance of these charismatic birds to our local history and culture. It turns out the Town of Sidney has an official Coat of Arms – granted and sealed by the Chief Herald of Canada, of the Canadian Heraldic Authority. (Who knew? I sure didn’t!). Anyway, prominently featured on this coat of arms, pictured on the right, are a pair of Buffleheads. The first version – sans ducks – was designed by Professor A.L.C. Atkinson in 1969, but in 1995 the Environment Advisory Committee suggested the addition of  both Buffleheads and Arbutus leaves to highlight the unique features of Sidney’s natural environment. So there’s an odd little piece of local trivia for you!

And If The Buffleheads Didn’t Seal The Deal… 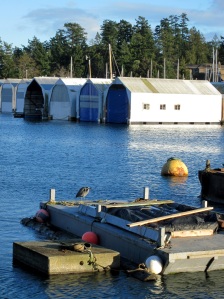 For such a little park Shoal Harbour houses some great plant life, including several surprisingly tall Douglas-firs and several lovely Arbutus that lean out over the water and look absolutely spectacular in the warm light of the setting sun. There is a beautiful rocky outcropping at the end of the point on Resthaven Island with a small gazebo and a comfy bench – the perfect spot to relax and enjoy the beauty of the harbour. Last but not least, keep an eye out for the resident Great Blue Heron – it generally prefers to hang out on quieter docks or a rocky outcropping, waiting for the perfect snack-sized fish to swim by. All in all this is a great little park to visit if you’re in the neighbourhood. It’s a quick walk around the island – maybe 20 minutes if you’re sauntering along – but for such a small urban park it packs a good punch of wildlife and scenery.

Getting To Shoal Harbour (via Resthaven Linear Park):

The best way to access this tiny park is through the little parking lot at 10440 Resthaven Drive. If you’re taking transit instead, there’s a convenient bus stop right at the entrance to the park on the 70, 72, and 81 routes.

More Heart of the West Coast:

Have You Met Elk Falls Yet?

A Tale of Mice and ‘Fir’ Trees

What Is This Place?

Welcome! My name is Heather. Here you'll find a little natural history and wilderness lore, the occasional philosophical interjection, and an eclectic chronicle of life on Vancouver Island. By sharing the distinctive character of this place, I hope you'll be intrigued and entertained while at the same time finding points of resonance with your own places and experiences. Thanks for stopping by - I hope you like it here.